Most popular in our offer

The Royal Canadian Mint is well known and reputable mint for investors, which offer the investments in precious metals. On the official website of the Mint, we can read that they have already sold more than 25 million ounces of the gold coin.

The Canadian Gold Maple Leaf coin is the most popular gold coin minted by The Royal Canadian Mint and one of the most popular pure gold coin in the world. Maple Leaf coin was introduced in 1979 and looks almost the same as it was by the first time.  The obverse of these beautiful bullion coin show the right-facing profile of Queen Elizabeth II, along with the year and face value. The reverse is adorned by the national symbol of Canada – Maple Leaf. We can see also there the information about metal finesse, which is made of (Au .9999) and the name of the country, where is minted (Canada). The author of the coin’s project was Walter Otto. Since 2015 both sides of the coin have additional lines in the background. The uniqueness of the line width and pitch gives this coin a characteristic look and creates a light diffracting pattern that is specific to this coin. This coin has also many unique Security Features to confirm the authenticity of Canadian Maple Leaf coin and to prevent its falsification. For example, we can find the microengraved Maple Leaf on the reverse side of the coin. In the centre of this mark, visible under magnification, is the coin’s issue year. 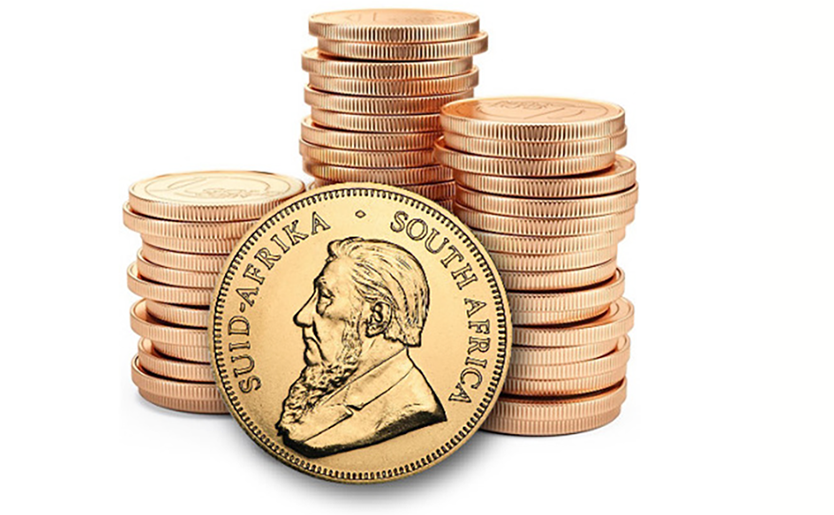 The South African Mint is the leading African mint with over 100 years’ experience in supplying coins to Africa and the world. According to official website of South African Mint, the sell of the all Krugerrand gold coins counted in more than 60 millions.

The Krugerrand is regarded as the world’s most widely held and actively traded gold bullion coin. The name of the coin comes from the name of the president of the Republic of South Africa in 1960s – Paul Kruger. The second part of the name “rand” is the name of the national currency in RSA. The gold coin was introduced in 1967 and has almost had the same look, as it was by the first time. At the beginning it was only minted as 1 ounce gold coin, but in 1980 were added to the range the fractional Krugerrands (1/2oz, 1/4oz, 1/10oz). As one of the few coins, it is made of the lower gold finesse (Au 916) with a small copper additive. Thanks to that the coin has the characteristic reddish colour and the increased scratch and deformation resistance. On the obverse of this beautiful bullion coin we can see the Paul Kruger image and the name of the country South Africa in two languages (African and English). The reverse of the coin shows the national symbol of South Africa – Springbok antelope. We can see there also the year of the coin issue and the lettering “Fyngoud 1oz fine gold” informing about the content of pure gold. 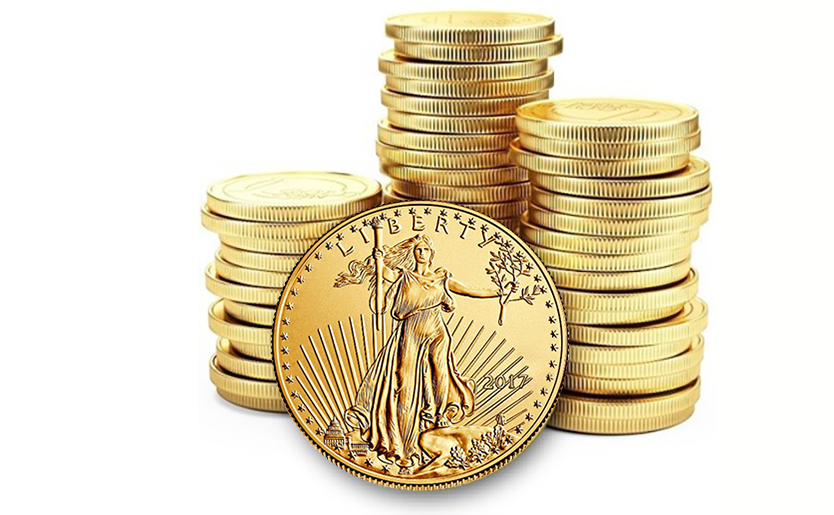 The United States Mint is a well known and reputable mint for investors, which produces between 4 and 10 billion coins annually.

The American Eagle coin is the most popular gold coin minted by the United States Mint. First time it was introduced in 1986 and its design has been the same till today. This beautiful bullion coin presents on its obverse the personification of Liberty, the symbol of United States and liberation, walking with attributes of peace: an olive branch and a torch. Under the foot of it we see the headquarters of the US Congress and in the background we see the sunrise. The obverse was created for the mintage between 1907-1933 by Augustus Sain – Gaudenes. The reverse presents the Eagle landing in its nest. This image was designed by the sculptor- Miley Tucker- Frost. In addition to the bird, we also see the American slogans from the Declaration of Independence: “In God we Trust” and “E pluribus unum”. The coin is made of 22k gold (Au 916) and contains a cooper alloy. Because of that, the coin is heavier, more durable and more resistant to mechanical damage than other gold coins made of pure gold (Au 999). The American Eagle is the only coin in the world until today, that is minted with reversed stamp (the obverse and the reverse of the coin are turned 180 degrees apart)

The Austrian  Mint is well known and reputable mint which history began at 12th century. At the beginning it was the Vienna Mint, which became the State Mint after the first world war. The Austrian Mint is subsidiary of the Austrian National Bank, the products minted by the Austrian Mint has the government guarantees of the the metal purity. On the official website of the Mint, we can read that last year they sold more than 647100 ounces of the Vienna Philharmonic 1oz gold coin.

The Vienna Philharmonic is one of the most popular coin minted by Austrian Mint. First the first time introduced in 1989, looks almost the same as it was at the beginning. The obverse side of these beautiful gold coin features the famous pipe organ from the Goldener Saal of the Viennese Musikverein, gold finesse and the year of the issue. The reverse side shows eight characteristic orchestral instruments: four violins either side of cello in the foreground and the Viennese horn, the bassoon and harp behind. The coin was designed by Thomas Pasendorfer. The coin design was developed using the computer graphics and then transferred to gold. According to the World Gold Council, it was the best selling gold coin in the world in 1992, 1995, 1996, and 2000. 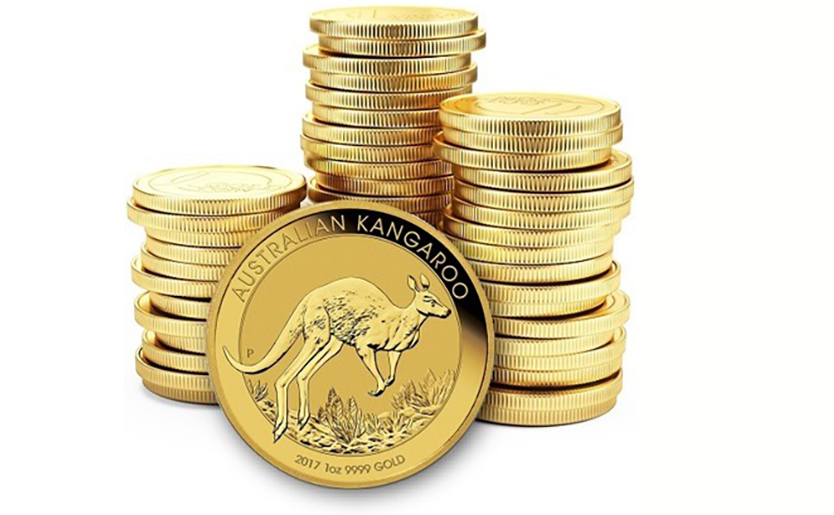 The Australian Kangaroo is one of the most popular gold coin minted by Perth Mint. First time it was introduced in 1986, but under some other form as it has today. At the beginning the name of the coin was Australian Nugget, because the design of the coin represented only the image of the nugget of gold. After three years the design was changed to the national symbol of Australia – the Kangaroo. We can see the Kangaroo on the reverse side and it’s changing a little bit every year. On the reverse side we can find also the metal finesse, the weight and the year of coin issue.  This beautiful bullion coin shows on the obverse side the image of Queen Elisabeth II with her name and nominal value of the coin. 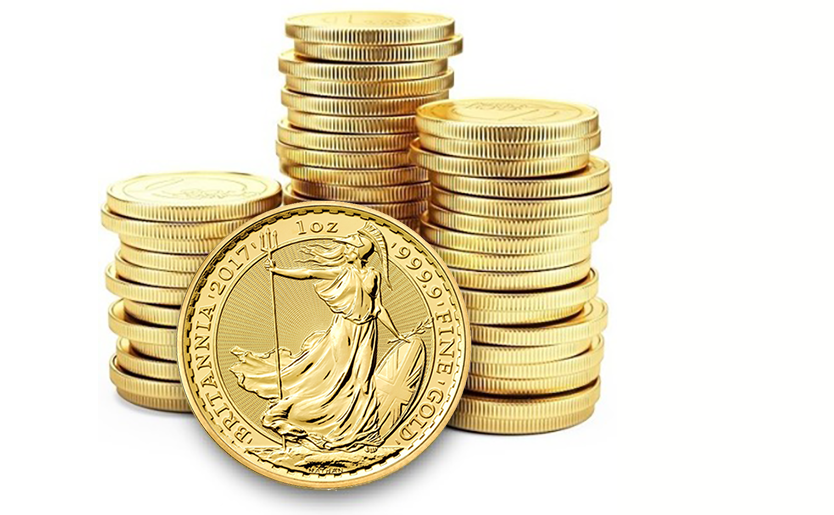 The British Royal Mint is one of the oldest and most developed European mints. It produces coins and medals for about 60 countries around the world. It also has exclusive use for the production of pounds and state decorations in the United Kingdom.

The Britannia is the most popular gold coin produced by the Royal Mint. It was first introduced in 1821. This beautiful bullion coin on its obverse reveals the image of Queen Elizabeth II, Queen of United Kingdom in the crown, and the nominal value of the coin (£ 100). The obverse of the coin is modified in every year, in order to emphasize the uniqueness of this coin. The reverse of the coin remains unchanged and represents a traditional Britannia figure armed with a shield, an olive branch and a trident. In her surroundings we will find information with the name, metal finesse (999.9 fine gold) and weight of gold (1oz). The reverse was designed by Philip Nathan, and the obverse was done by Jody Clark. In the 2017 the coin has been additionally secured by the lines in the background. 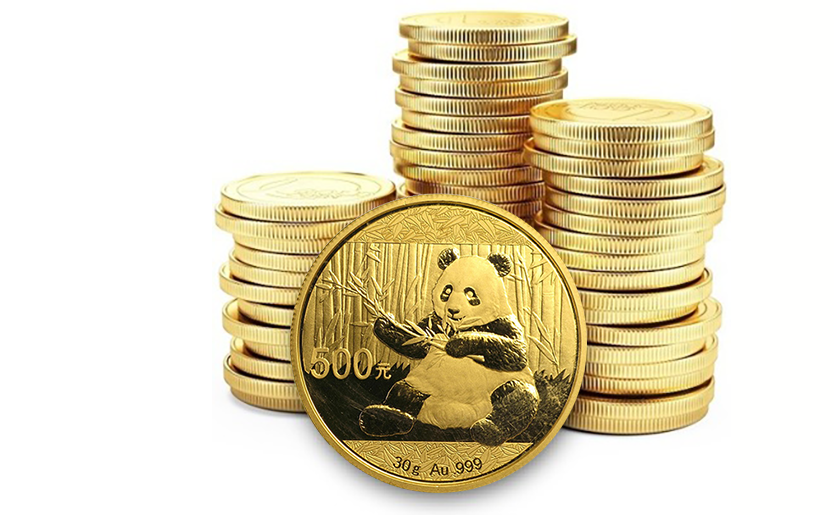 The Central Mint (originally named Shanghai Mint) is a subsidiary of the Central Bank of the People’s Republic of China. The major activities of the mint are minting and melting circulation, production of commemorative coins, and medals and other kind of casting products for government institutions and businesses.
The Chinese Gold Panda is a series of gold bullion coins issued by the People’s Republic of China. The Official Mint of the People’s Republic of China introduced the panda gold bullion coin in 1982. The Panda design changes every year (with a single exception) and the Gold Panda coins come in different sizes and denominations, ranging from 1/20 oz to 1 oz (and larger ones as well). On the obverse is a depiction of the Temple of Heaven in the center with Chinese characters on the top saying “Zhonghua Renmin Gongheguo” meaning “People’s Republic of China” and on the bottom the year of issue. If the issue is a commemorative issue, the theme will be marked here also. The reverse of the coin shows a different portraits of panda which are changing every year.

The Australian Year of the Dog is another gold coin of the Lunar II series minted by the Perth Mint. The first series of mints began in 1999, which – according to the Chinese calendar – was a Rabbit Year. It was the image, that appeared on the first coin of the Lunar I series. The last coin in this series was a Year of the Pig (2007). The popularity of the first series of Lunar coins prompted Perth Mint to release the Lunar II series, which began in 2008 (Year of the Rat) and will end in 2019 (Year of the Pig). This coin, apart from the metal value (Au 9999), also has a collector’s value because of  its limited release. The Year of the Dog can be found in weights from 1/20 oz up to 1 kg. This beautiful bullion coin on its obverse shows the image of Queen Elizabeth II and the weight, year and country of issue. The coin’s reverse is decorated with the symbol of the current year in the Chinese Calendar – a Dog which is represented by Labrador. Below the image of the dog is the inscription “Year of the Dog”